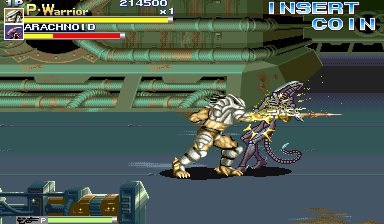 Alien vs. Predator is a 2D side scrolling beat'em up based on the Alien and Predator film franchises. Up to three players can pick from four characters to kill alien hordes and human enemies: there are two cybernetically enhanced humans (Major Dutch Schaefer, based on Arnold Schwarzenegger's character from Predator, and Lieutenant Linn Kurosawa) and 2 Predators (Warrior and Hunter).

All characters are equipped with a gun for ranged attacks, and three also have melee weapons: Linn has a katana, the Hunter has a bladed staff, and the Warrior has an extendable-retractable spear/staff. Dutch uses a cybernetic arm instead of a weapon. Gameplay is typical for the genre - players must walk to the right, kill all enemies, and defeat bosses.

Control and Alt are the attack buttons.

If anyone has tips or tricks, I'd love to hear them, but the game as it stands for me is broken.